The Zoom H1n boasts its own X/Y stereo mic, records to microSD/SDHC cards, gives you a limiter and a high-cut filter, and doubles as a USB interface. The smartLav+ gives you an omnidirectional polar pattern and a mic clip with cable management. The adapter, as previously mentioned, facilitates the connection between the recorder and the lav. Now you can mic your person, lapel-style, and record directly into the H1n.

An ideal fit for solo musicians and podcasters, as well as a terrific entry point into the world of audio for video and sound design, the gray Zoom H1n portable recorder features an onboard stereo microphone that lets you easily record two tracks of high-resolution audio in the palm of your hand. Songwriters will appreciate unlimited overdubbing for building songs layer by layer, while filmmakers and podcast producers will enjoy the H1n's ability to capture clean, distortion-free speech.

Like other H-Series Handy recorders such as the H5 and H6, you can hold it in your hand, attach it to a mic stand or tripod, or mount it to a camera (shoe mount available separately). Springing from the foundation of the original H1, the H1n packs an array of workflow and performance upgrades into a rugged body that's more than ready to meet the varied demands of videographers, musical artists, podcasters, and more. From its plentiful battery life to its multiple audio-enhancing functions, the H1n is well equipped for tracking live performances, rehearsals, and demos, or for recording sound effects, interviews, and ambience. It can supply plug-in power for a condenser lavalier mic, or accept a direct line-level connection from a mixer or wireless receiver. No matter the source, selectable auto-recording and pre-recording ensure that you'll never miss the start of a take.

What's New on the H1n

The H1n's front panel is arranged to ensure simple, straightforward access to its most commonly used controls—transport buttons for record, play/pause, stop, back, and forward operations, one-touch buttons for the low-cut filter, limiter, and auto-level functions, and a large gain knob (clearly labeled from 0 to 10). Of course, the selectable Auto Level mode makes setup even faster by automatically adjusting the input level according to the input signal.

For added safety, the power switch offers a hold position that disables all front-panel buttons to prevent accidental operation during recording. Day or night, view vital information such as audio levels, recording time, battery status, and more on the 1.25" monochrome backlit LCD.

Record in true stereo without external microphones; the H1n is outfitted with an onboard stereo microphone that provides clear, phase-accurate capture. The capsules are arranged in a classic 90° X/Y configuration for a tight stereo image. With nothing more than the H1n, you're set to record speech, practice sessions, concerts, or ambient and environmental sounds—even intensely loud ones up to 120 dB!

Thanks to a 3.5mm stereo mini-jack input that supplies 2.5V plug-in power, the H1n can accommodate an external condenser microphone such as a clip-on lavalier for crisp, close-miked speech reproduction. Plugging in an external source to the 3.5mm jack overrides the onboard mic input, so no manual input selection is required. Since the 3.5mm input also supports line-level signal, you can route the output of a wireless microphone receiver into the H1n.

Not only can the H1n record two channels at up to 24-bit / 96 kHz resolution, but it also supports unlimited overdubbing for layering new sounds over existing recordings. Since a new file is created and the original file is left unchanged, you can overdub without worrying about mistakes.

3.5mm Output for Hookup to a Camera or Headphones

The 3.5mm line/headphone mini-jack output features a dedicated volume control, making it capable of feeding your camera/DSLR or a pair of headphones. For quick playback reference, a built-in monophonic speaker is presented on the bottom of the front panel.

Power the H1n via two included AAA batteries, or plug it into a wall outlet with an AD-17 AC adapter (available separately). Alkaline batteries can keep the H1n recording the onboard X/Y mic at 16-bit / 44.1 kHz resolution for up to 10 hours. When using the H1n as an audio interface, USB bus powering is possible.

Rugged and Portable, Handheld or Mounted

The compact, durable, ergonomic body lends itself naturally to being handheld or stashed in a pocket. Should you need to mount it on a mic stand or tripod, a threaded hole on the back of the H1n obviates the need for stand adapters. Obtain a hot shoe adapter (available separately) to attach the H1n directly to a DSLR.

The H1n's onboard effects allow you to add polish to your recordings. The limiter can prevent distortion by controlling input signals that have excessively high levels, while a low-cut filter helps eliminate wind noise, blowing, and other kinds of low-frequency rumble. Also, you can adjust playback speed and choose from multiple tone-enhancing sound effects.

The H1n offers selectable recording functions designed to prevent you from accidentally missing the start of a performance. By keeping the previous two seconds of audio whenever you press the record button, the pre-record option ensures that you'll never cut off the beginning of a great take. Auto-record can automatically start recording when a user-set sound level is detected, making it great for voice-activated recording. You can even set a timer to make the H1n automatically start recording after up to 10 seconds.

An internal tone generator makes it easy to calibrate your H1n and camera audio levels. When the H1n is connected to a DSLR camera or other external device, a test tone can be played to match their output levels.

The Rode smartLav+ is a lavalier microphone for your Apple or Android mobile device that is designed to deliver high-quality audio recording. The smartLav+ clips on to your shirt or lapel, and the sensitive, omnidirectional condenser capsule captures the sound equally from all sides of the microphone. This design lends to effective, hands-free recording of speeches, interviews, dictations and more.

The smartLav+ is equipped with a Kevlar-reinforced cable that has been strain tested up to 10kg to help ensure reliable performance. It uses a grey-sleeved TRRS connector to connect into your smartphone or tablet's headphone input and it works with most audio recording apps.

The smartLav+ also features improved sensitivity and higher signal-to-noise ratio over the original smartLav. The package comes with a mic clip with cable management, a foam pop shield and a small carry pouch.

A full list of compatible devices can be found here.

Works with any audio app that records from the headset input

Record, EQ, edit, and publish your audio with Rode Rec App for Apple iOS (not included)

Combine with SC3 adapter to use with TRS devices

The Rode SC3 adapter cable is designed to connect a smartphone-compatible microphone that's equipped with a 3.5mm TRRS output connector to the 3.5mm TRS input of a camera or audio recorder.

The SC3 features color-coded connectors that are gold-plated to preserve audio quality. It can be used with the Rode smartLav+ and VideoMic Me, as well as mics from other manufacturers.

Set of Download Codes for Cubase LE and WaveLab LE 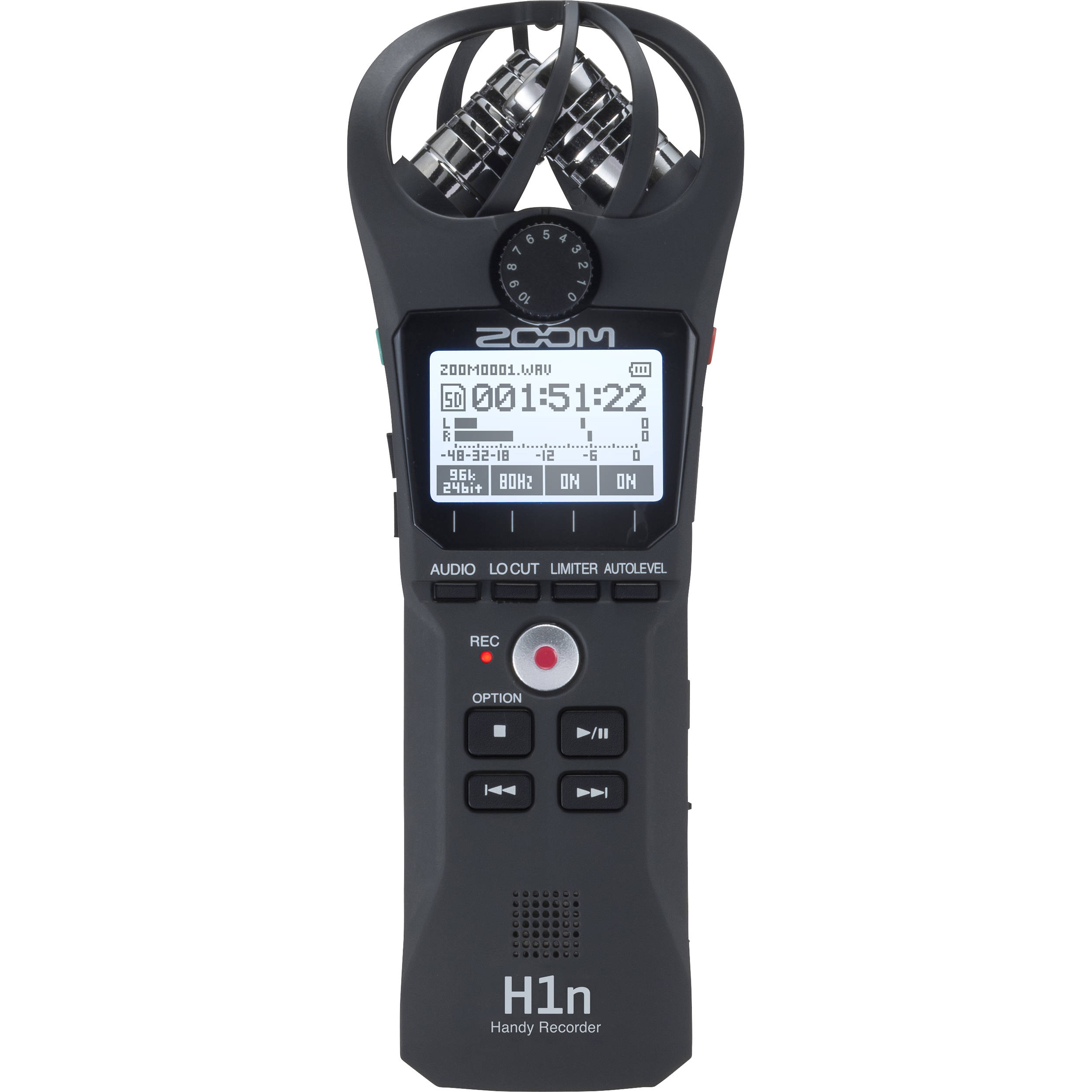 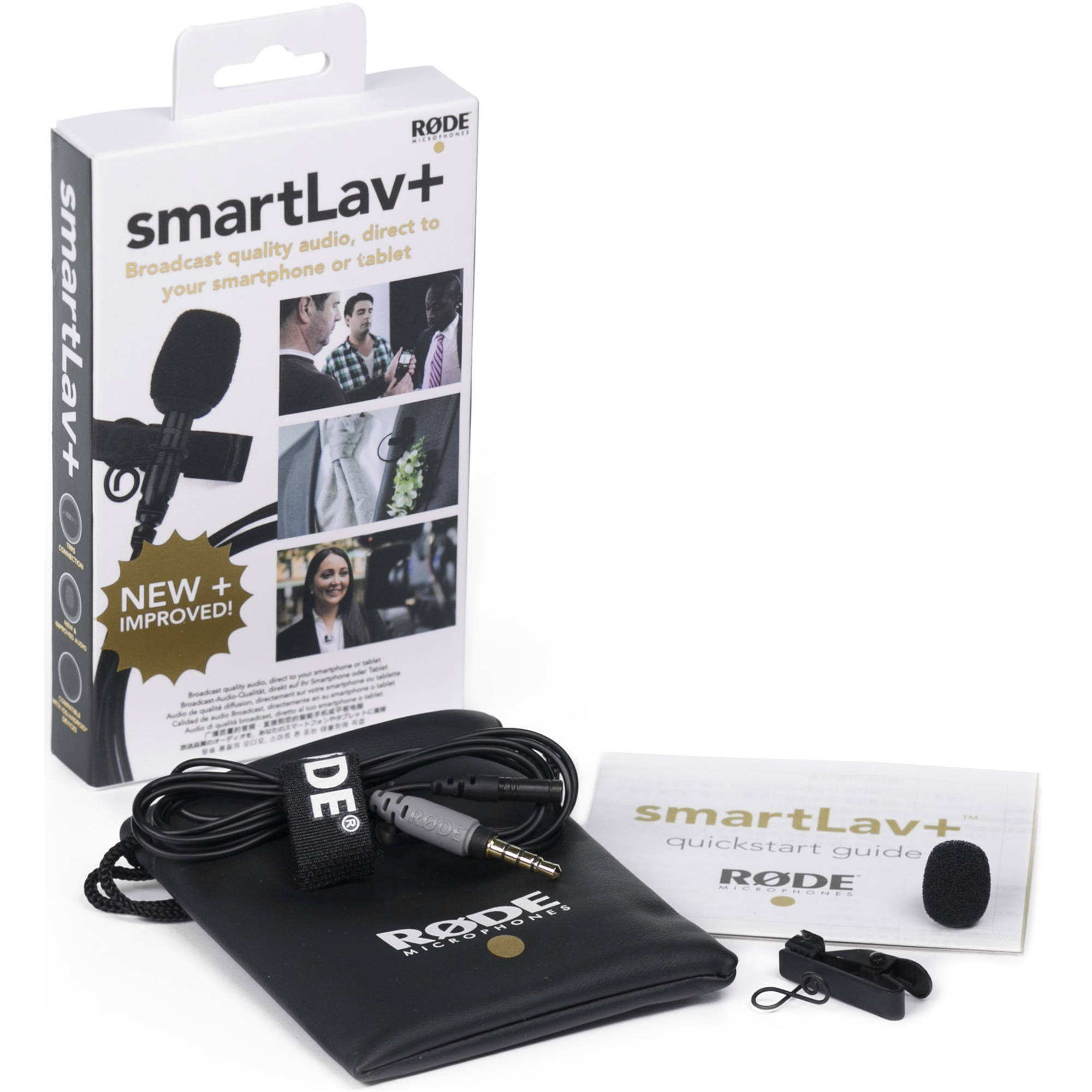 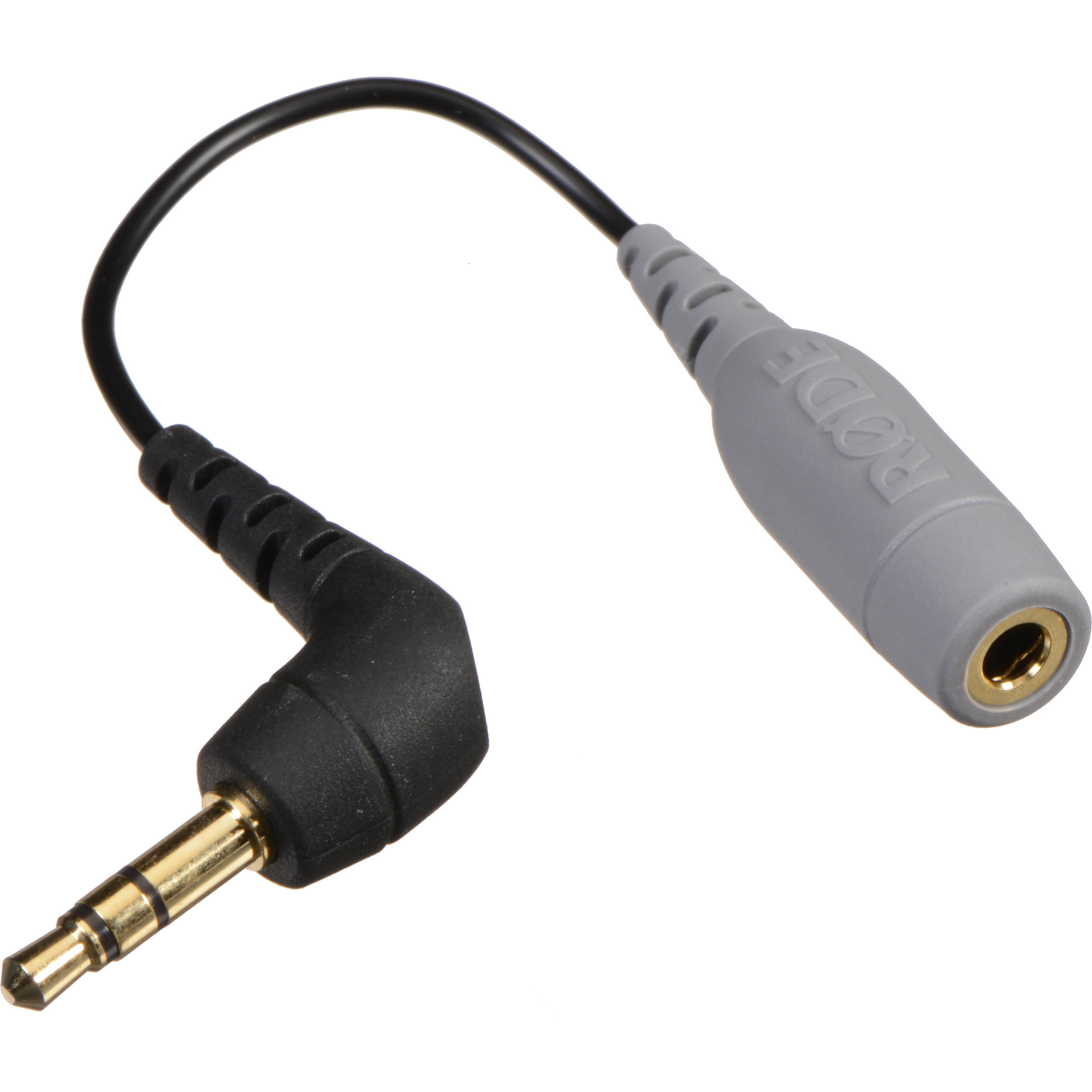 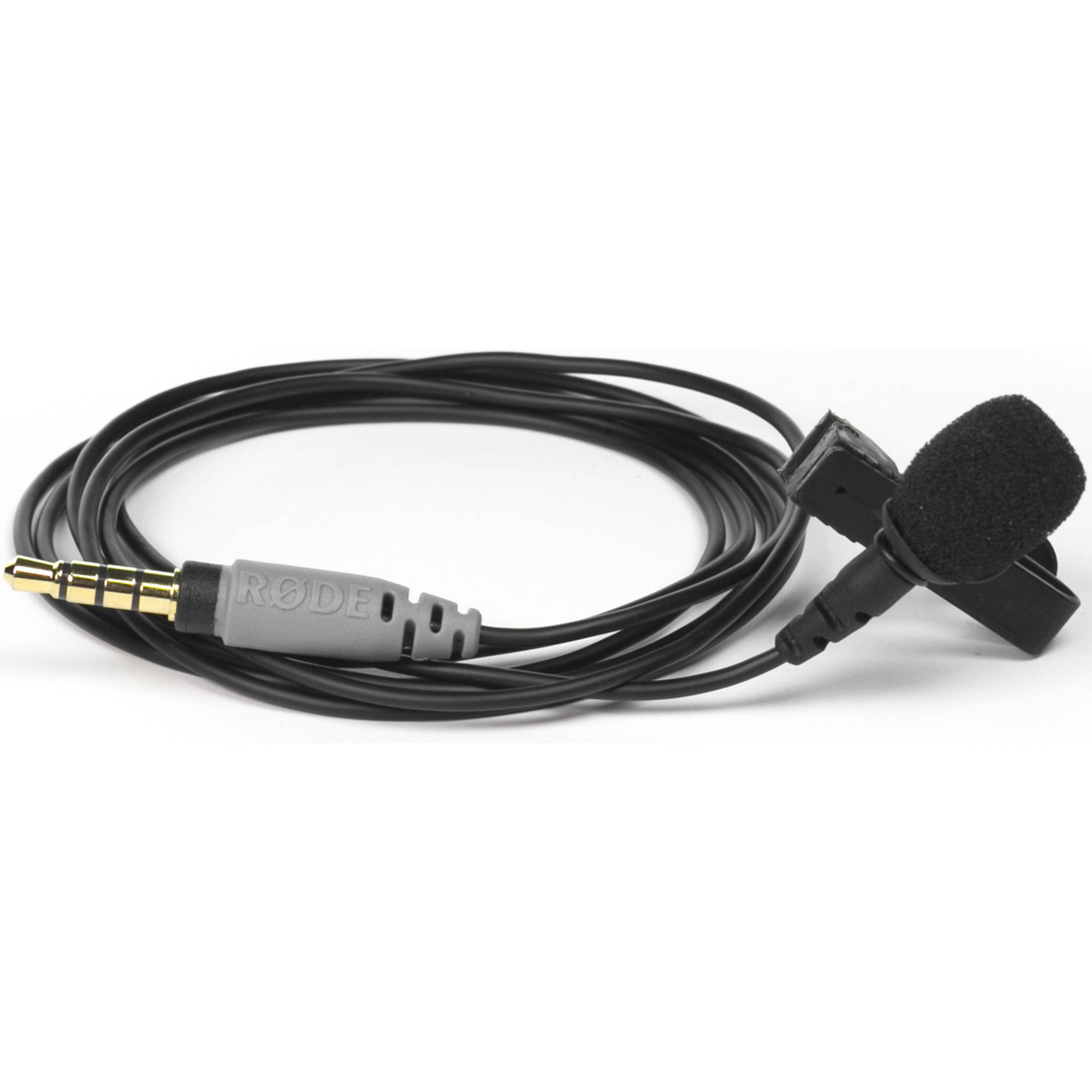