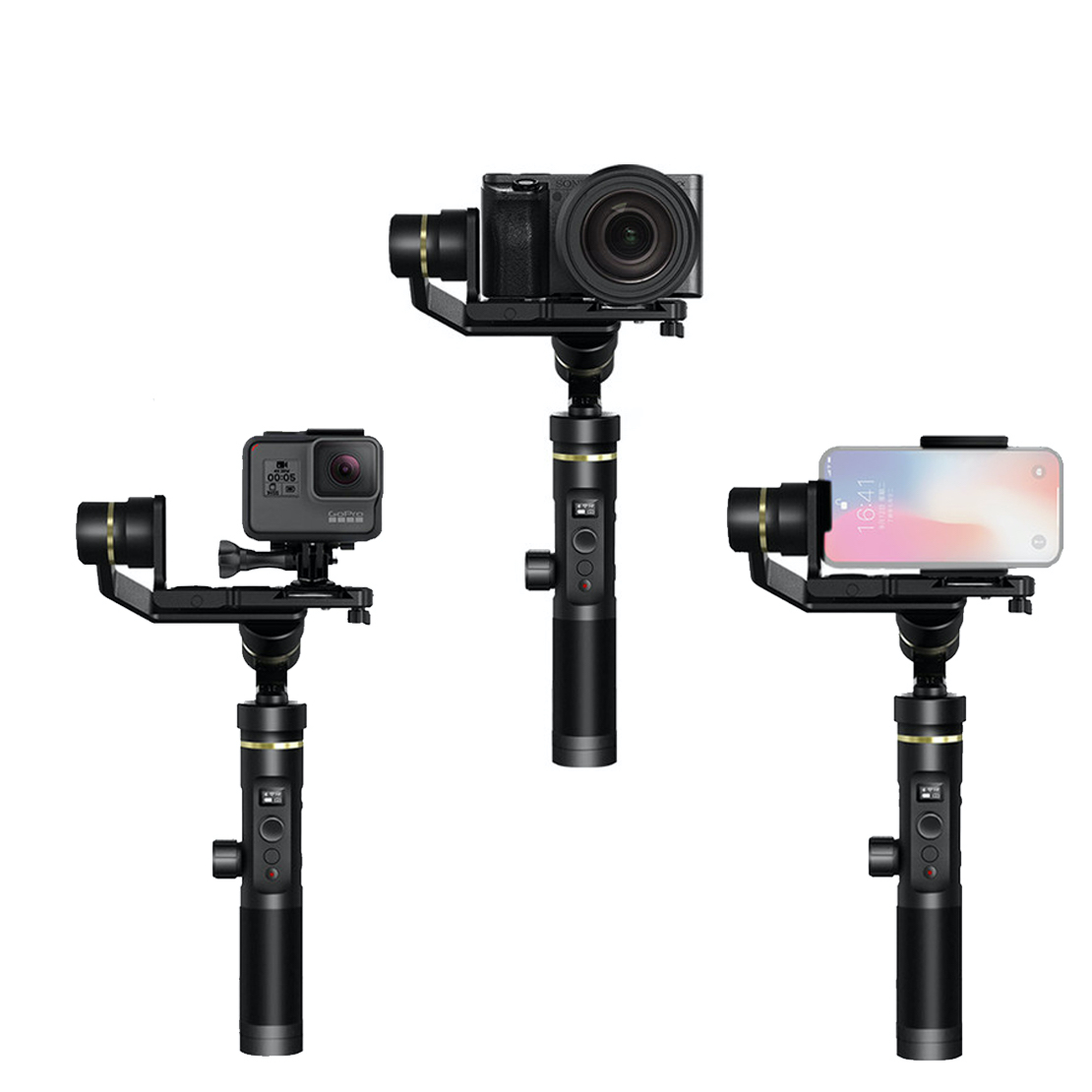 Slim Design for up to 1.75 lb Cameras

Lightweight for Freedom of Movement

In this second release of the G6 Plus, the Feiyu G6 Plus 3-Axis Handheld Gimbal Stabilizer 3-in-1 features the G6 Plus, an action camera adapter, and a heavy-duty smartphone mount that's larger and sturdier than the FY A029 phone mount accessory that Feiyu has been offering. The G6 Plus is designed for compact cameras weighing up to 790 g and measuring under 2.75" in height, such as the Sony a6500, and it's one of the few gimbals made slimmer and lighter to offer more freedom of movement with such cameras. For many users, anything heavier than an a6500 just isn't necessary, and while a larger gimbal will support an a6500, it won't be as light or as free in the hands.

Beside all this, the G6 Plus is an exceptional gimbal in its own right. It's like one of Feiyu's industry-leading full-size gimbals but slimmed down. It feels solid, dense, and well-made in the hands, and the mechanics, electronics, and smartphone apps are advanced. And that's the whole point of the G6 Plus—quality and freedom of movement for compact cameras. In addition to all this, it supports Feiyu's extension poles via 1/4"-20 screw attachment to the bottom. The extensions are also solid and dense, and they provide even more control, letting you use the gimbal as a motor-stabilized, lightweight, handheld jib.

Handheld motorized gimbals are among the most useful and revolutionary camera supports ever made; they're used in independent films, professional video production, press conferences, and nature films among some examples. Where before one couldn't easily stabilize a handheld camera, now one can get smooth, Hollywood-style shots and even have the freedom to experiment with different camera movements, as much as perform acrobatics with the camera (the extension pole makes all the difference with this).

Another key aspect of the G6 Plus is the ability to sync up with select cameras over the companion Feiyu ON Wi-Fi app and control focus and zoom using the rotation knob on the side of the gimbal. The knob is set to control zoom by default but can be quickly switched to control focus by pressing on it. Please see the list of compatible cameras in the Features section below. Camera synchronization also enables control of record start/stop and photo capture via the other gimbal buttons. A second app is also provided, the Vicool Bluetooth app for various video capture features and parameter settings. Both apps are offered as free downloads for iOS and Android.

The heavy-duty phone mount supports all common smartphones with a width of 2.2 to 3.4". Supported action cameras via the action camera adapter include the GoPro HERO7, Yi Technology 4K, and similar-size models. The Sony RX0 action camera is also supported via the optional FY A034 RX0 accessory.

The G6 Plus has an aluminum construction and uses three stabilization motors. It offers multiple stabilization modes and features the above-mentioned rotation knob, a joystick, and a few other controls. It has an OLED screen that interacts with the controls, and it runs for up to 9 hours on the included battery. All this in a gimbal that weighs just 790 g while feeling robust in the hands.

At the time of the release of the G6 Plus 3-in-1, the following cameras are supported for zoom/focus control via the rotating knob on the side of the gimbal: 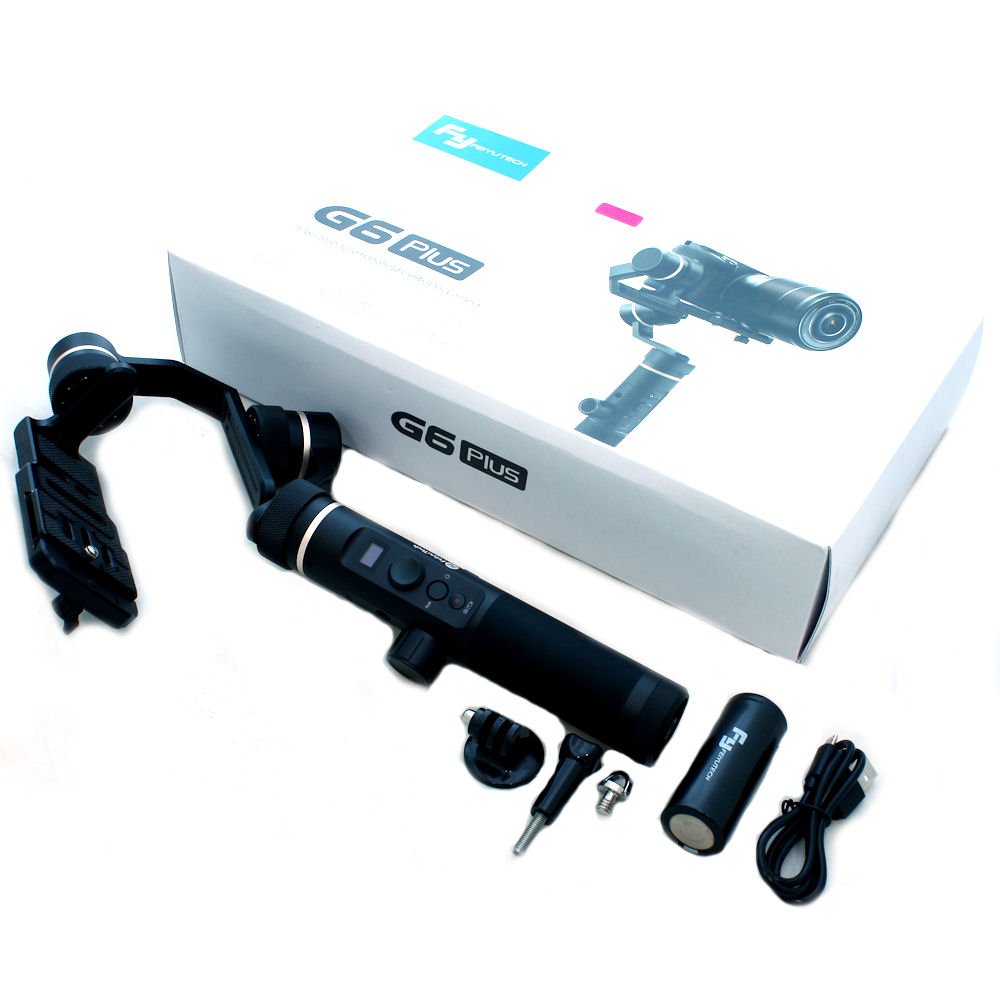 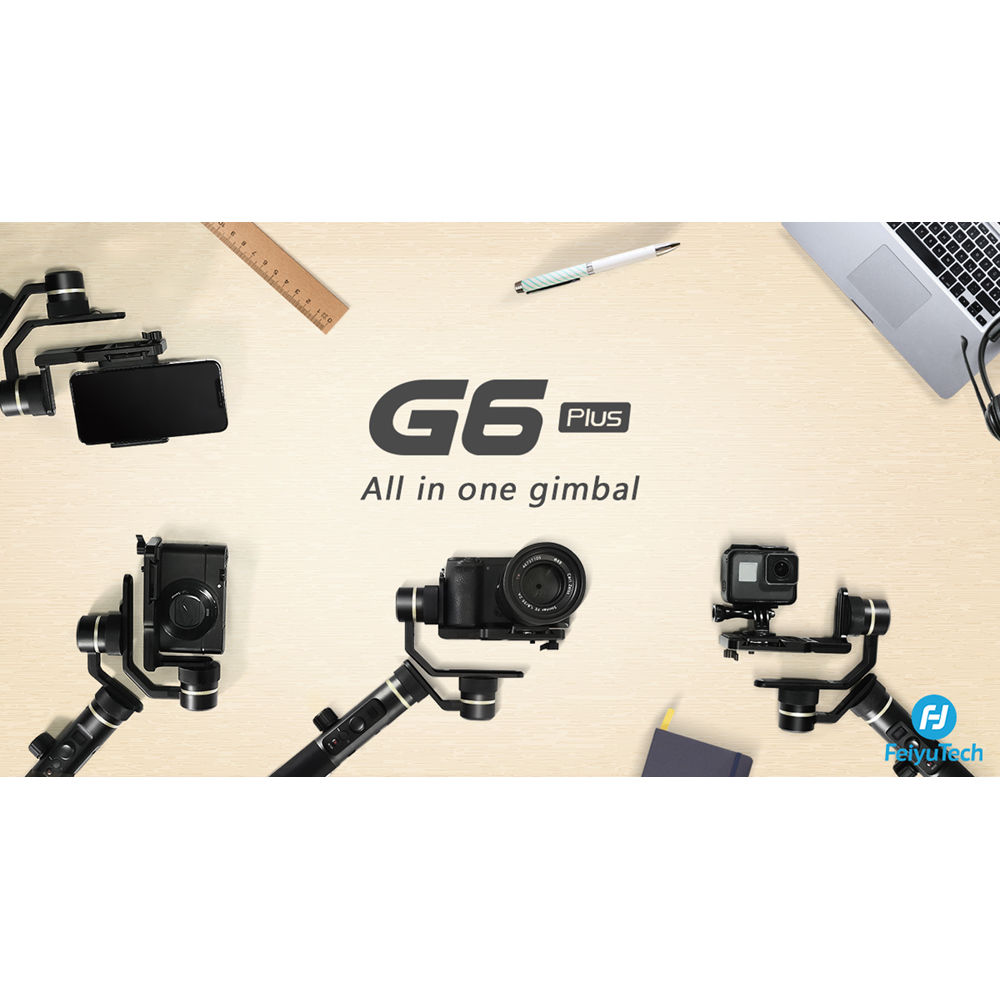 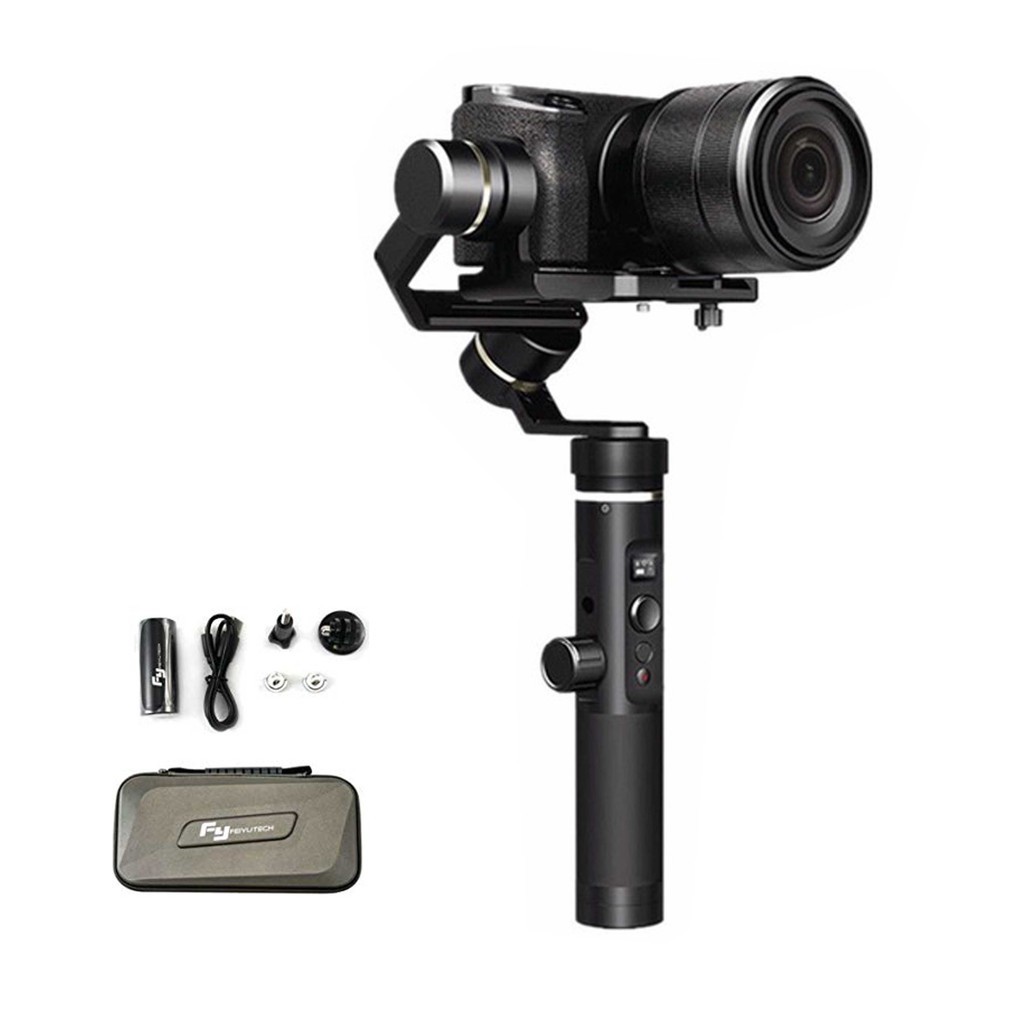 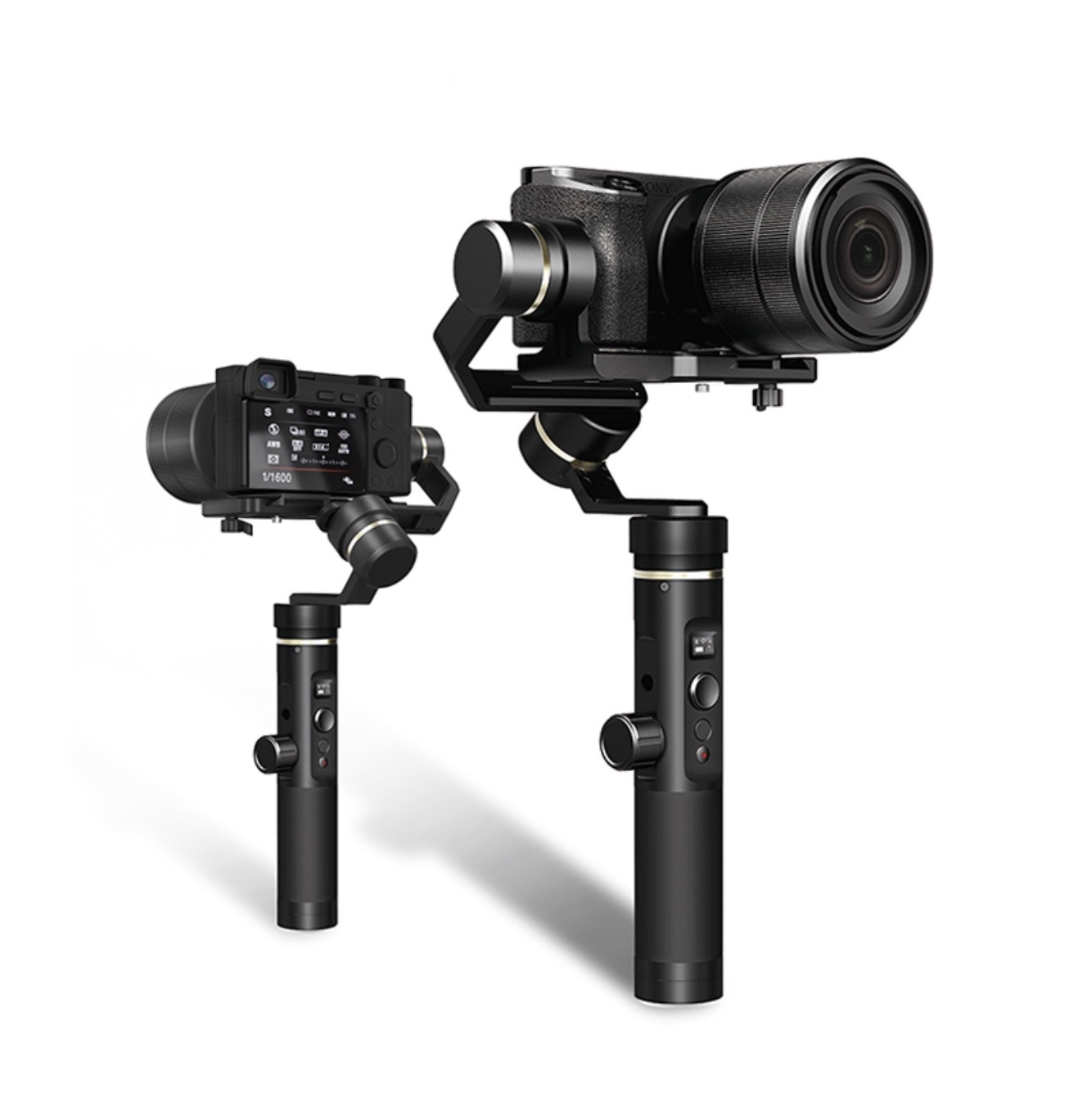