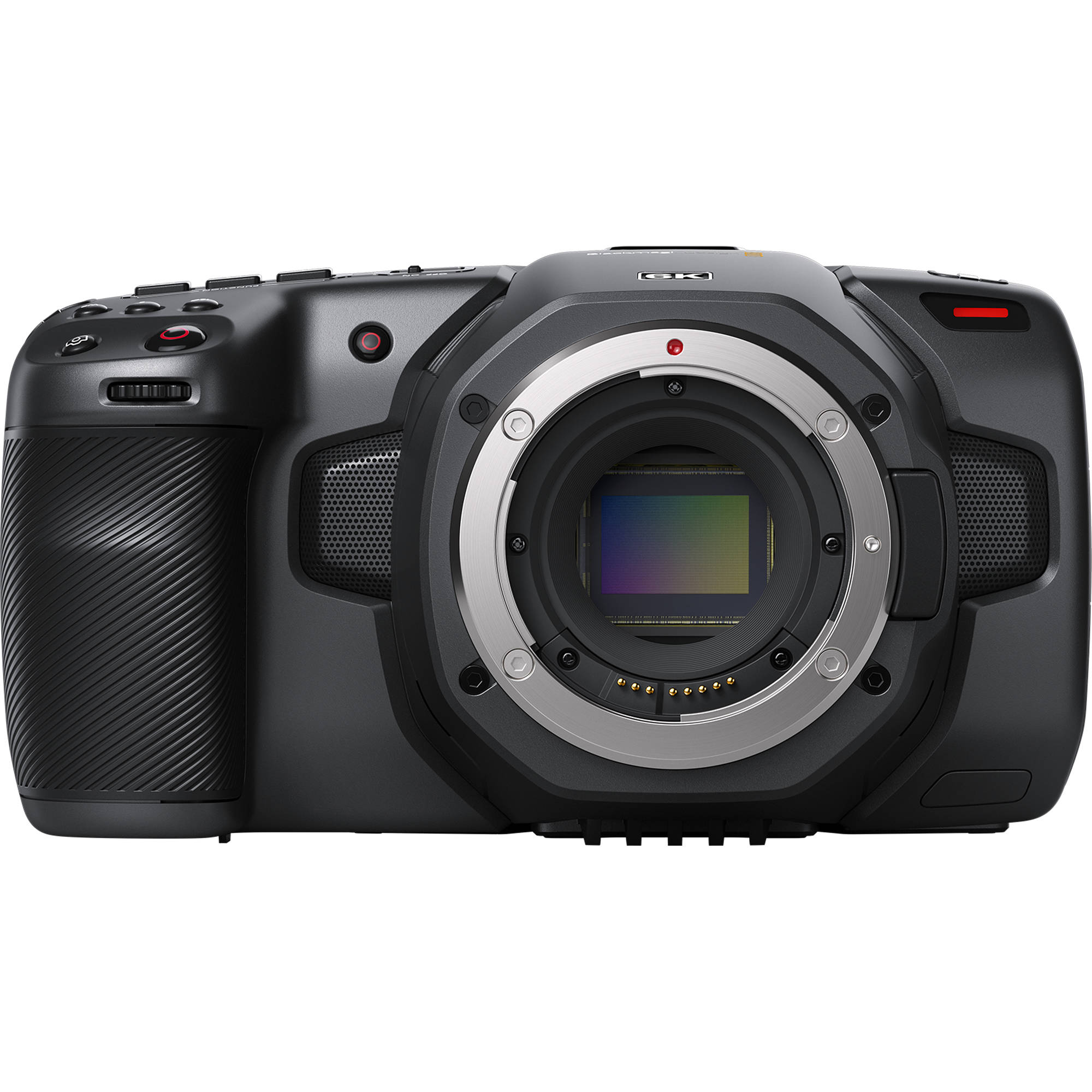 Blackmagic Design ups the ante in compact cine-style capture with their Super 35 sensor Pocket Cinema Camera 6K. Not only can the BMPCC 6K record up to 50 fps 6144 x 3456 video, but in a boon to lens connoisseurs everywhere, it features an active Canon EF mount, letting users take advantage of the expansive array of EF-mount lenses available.

Turn to the BMPCC 6K to turn one frame into two by cropping a second shot from one frame, to upscale to 8K, or to simply capture rich, detailed footage with your favorite EF-mount lens. The same internal color processing makes it easy to intercut BMPCC 6K with BMPCC 4K footage. Record using the internal CFast 2.0 and SD/UHS-II card slots or output via the USB-C port to capture longer clips to an external drive. The BMPCC 6K includes a DaVinci Resolve Studio license and supports Blackmagic Raw capture from the sensor. Using the Raw format with the sensor's metadata simplifies editing to suit any project and makes editing easier with DaVinci Resolve.

The compact BMPCC 6K retains the familiar controls and menu layout of the 4K version in a minimally deeper form to accommodate the EF lens mount. Features such as ISO support up to 25,600, 13 stops of dynamic range, 1920 x 1080 monitor output, and a bright 1920 x 1080 touchscreen 5" LCD are carried through from the BMPCC 4K as well. Professional audio support includes a mini XLR input with phantom +48V power and four built-in mics. Whether you're shooting an indie film, wildlife, or fashion, the BMPCC 6K's compact form is less intrusive than larger cameras, lending itself to more intimate setups. The BMPCC 6K is fashioned from a carbon fiber polycarbonate composite that is both lightweight and durable.

Additional pro features include lens metadata support, 3D LUT application for both monitoring and recording, up to 21.2MP still image capture, and a multifunction grip that enables single-handed operation. Sync multiple cameras for a concert, event, or other multicam shoots by linking an external timecode generator to the BMPCC 6K's internal timecode generator (accessed via the 3.5mm audio port). Then save valuable time by using Resolve 16.1 to automatically sync your multicam shots in post.

In addition to the DaVinci Resolve Studio activation key, the BMPCC 6K comes with a power supply offering simultaneous battery charging, an LP-E6 battery, a lens port cap, and a camera strap.

Up to 6K Shooting Resolutions

Record internally to CFast 2.0 or SD/UHS-II card slots, or capture longer clips using the USB-C output to an external drive

The BMPCC 6K is compatible with DaVinci Resolve 16.1 and includes an activation key for Resolve Studio 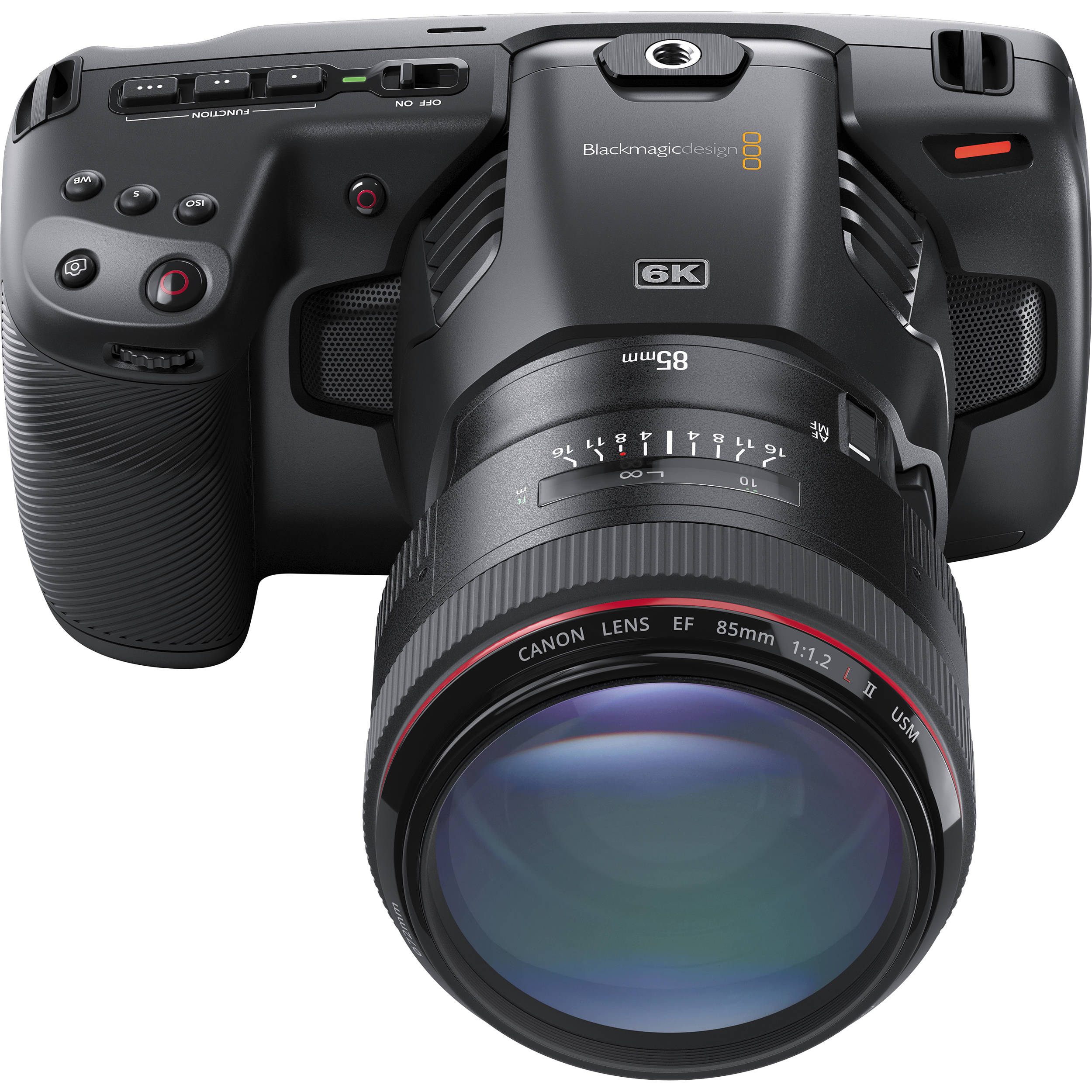 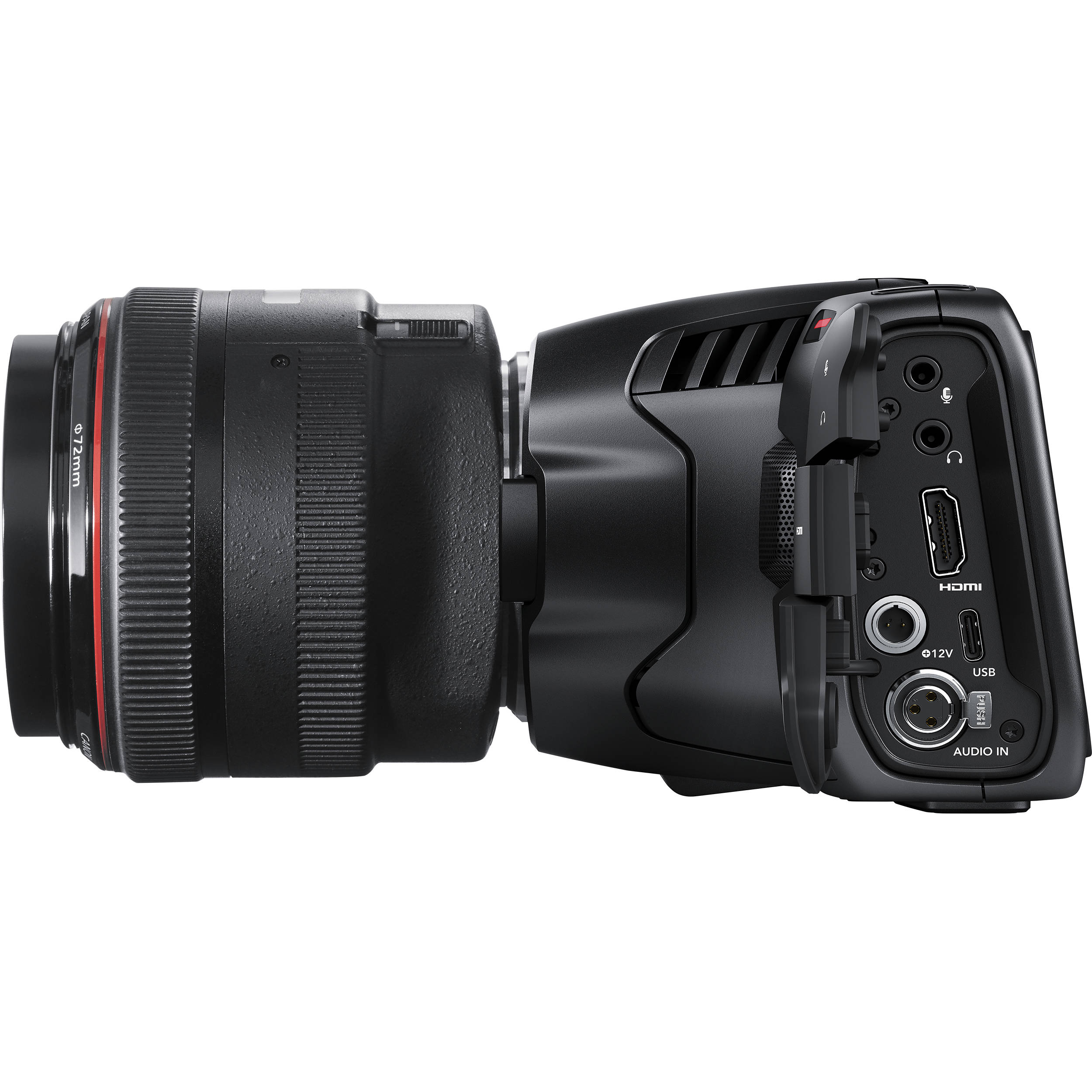 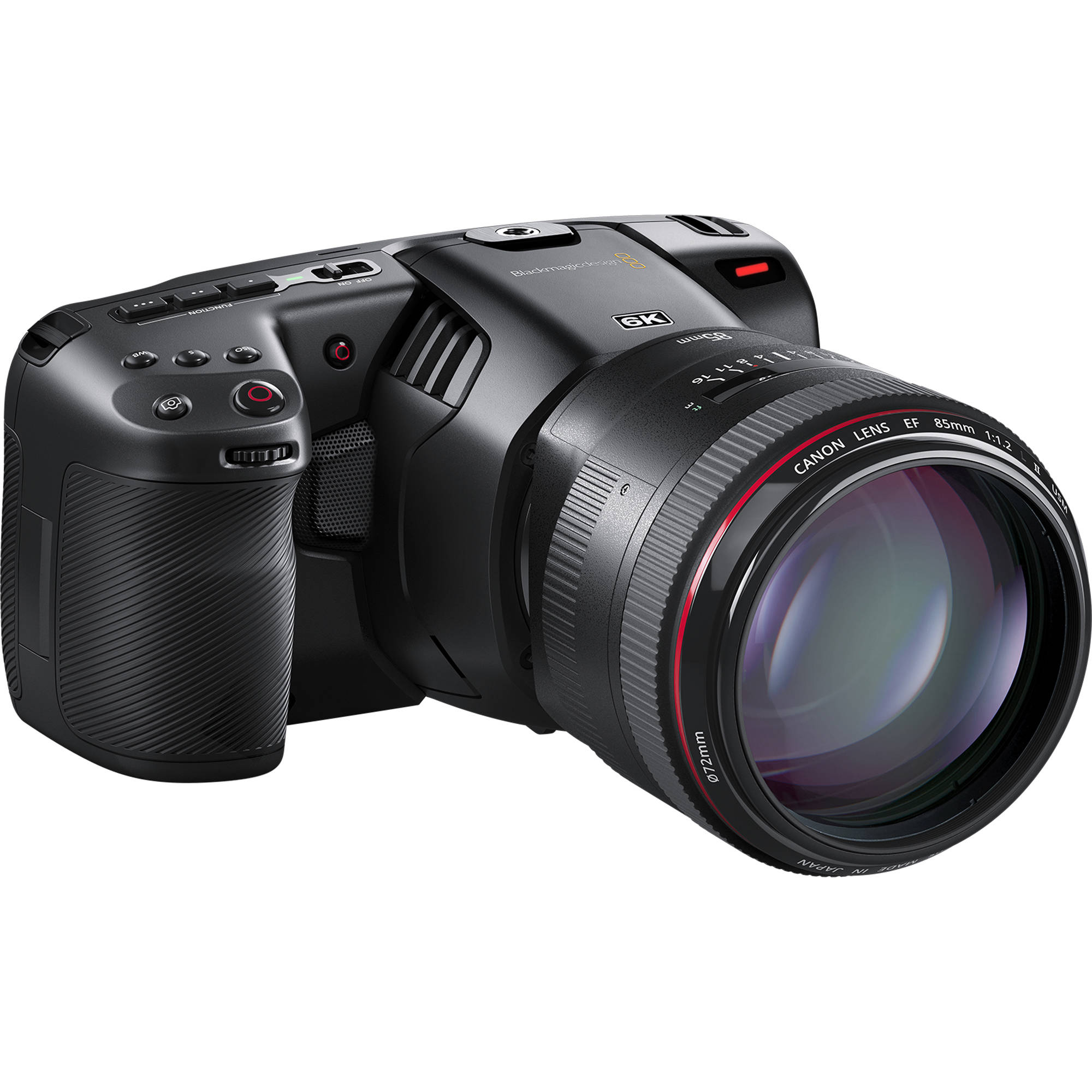 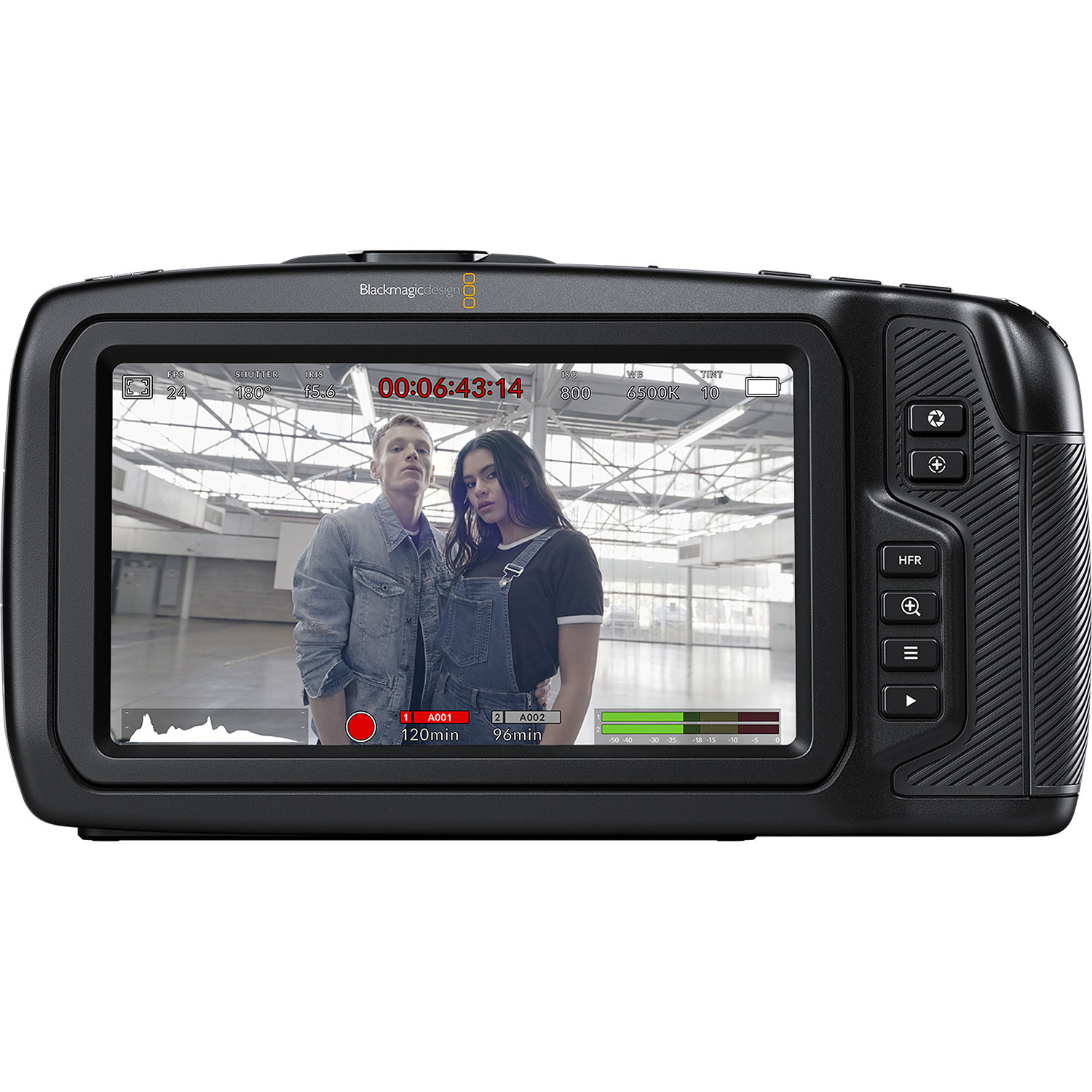